The 3 Dimensions of Design Model (3DD)

The 3 Dimensions of Design” (3DD) is a model that can be used to strategize the adoption of a human-centered problem-solving practice inside an organization.

Design, designing, and being human-centered

The 3 dimensions of designing model

The act of designing, as previously defined, is a function of 3 dimensions: thinking, doing, and environment. In Figure 1 we can see their interplay and notice the underlining assumption that a human-centered (or design-driven) culture is a function of mindsets and environment; C=f(M/E). The thinking and doing activities in a given context establish a two-way relationship that creates the organization’s culture.

The “thinking” dimension is defined by the ability to get “a deep holistic human understanding” in exploring the problem domain. This ability implies skills to empathize, learn from the user and define a problem domain based on human’s needs.
The “doing” dimensions is defined by the ability to “make meaningful connections materializing new possibilities” in the form of hypotheses. This ability implies skills to ideate and generate and downselect a range of solutions and build a real representation of them in the form of a prototype to propel the design conversation.
The “environment” dimension is defined by the physical context; where the workforce operates. Ultimately, the physical environment is the system that enables and nurtures the “thinking” and the “doing” activities. 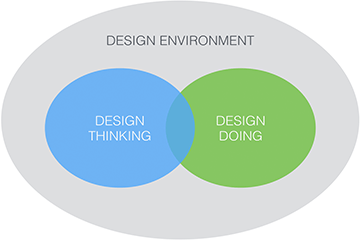